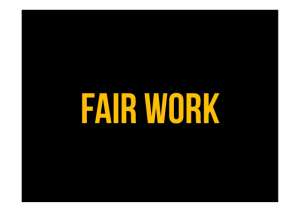 The primary remedy for unfair dismissal is reinstatement (Fair Work Act, sub-sec 390(3)). If reinstatement is ordered, the Commission may also make an order

(a) to maintain the continuity of the person’s employment thus maintaining continuous service (sub-sec 390(2); and

(b) to restore lost pay (sub-sec 390(3)). Such an order is not considered as compensation and is not subject to the arbitrary compensation cap provided for in sub-sec 390(5).

Compensation (cannot be ordered in tandem with reinstatement; sub-sec 390(3)(a))

Financial compensation may be considered only after the Commission is satisfied that reinstatement is inappropriate and can only be ordered where the Commission considers it appropriate; sub-sec 390(3)(b).Compensation is designed to compensate an unfairly dismissed employee in lieu of reinstatement for losses reasonably attributable to the unfair dismissal; Kable v Bozelle, Michael Keith T/A Matilda Greenbank  [2015] FWCFB 3512. Thus it is generally thought that compensation can include an allowance to include financial loss other than lost remuneration such as a lost bonus.

Compensation cannot be awarded non-economic loss such as for shock, distress or humiliation, or other analogous hurt; sub-sec 392(4).The calculation of compensation for economic loss is undertaken in accordance with the formula set out in a famous case called Sprigg v Paul’s Licensed Festival Supermarket (1988) 88 IR 21 and the  formula has been refined with use. The Sprigg formula was decided under previous legislation but it has continued to be applied under the Fair Work Act.

If, when applied, the Sprigg formula ‘yields an amount which appears either clearly excessive or clearly inadequate’, then the Commission should reassess the assumptions made in reaching that amount. Smith v Moore Paragon Australia Ltd (2004) 130 IR 446   Compensation should be appropriate having regard to all of the circumstances of the case.

Here is the Sprigg formula in operation.

2. Deduct any remuneration earned by the employee since their dismissal until the end of the anticipated period of employment.

3. Deduct an amount for contingencies. This is a calculation of future economic loss. In Ellawala v Australian Postal Corporation Print S5109 the Commission made the following points in relation to contingencies:

Step 3 involves the deduction of an amount from the total remuneration for situations that may have arisen and which ‘might have brought about some change in the earning capacity or earnings’.

• A 25% discount for contingencies was applied in Sprigg.500 This amount was decided on the basis of the facts of that case.501 It is not a statement of an amount that is generally appropriate.

• In assessing the impact of contingencies it is necessary for the Commission to exercise broad discretion and this involves considering both favourable and unfavourable contingencies.

• Contingencies only apply to the anticipated period of employment.

4. Consider the impact of taxation and adjust the figure accordingly. The compensation amount is reduced by the tax the employee would have paid if he or she had received the amount as wages. This provides the net amount.

The net amount is then increased by the amount of tax liability on the compensation as ordered. This is usually taxed as an employment termination payment (ETP).

The compensation cap is provided for by sub-sec 392(5) and is the lesser of one half of the high income threshold at the point of dismissal or the total amount of the remuneration received by the person or to which the employee was entitled (whichever is the higher) for any period of employment with the employer during the 26 weeks immediately before the dismissal. (see the regulations for the formula to use if the employee was on leave without pay or without full pay duting that time).