How to interpret the Fair Work Act 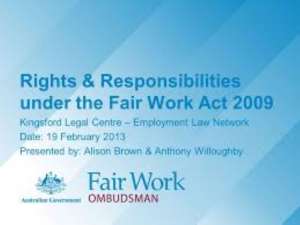 It is very trite, but there are legal principles which are applied to the task of interpreting legislation, including the Fair Work Act and Regulations. For example the meaning of the expression “workplace right” continues to be a subject of controversy, and indeed was one of the matter sin dispute in the following case, an extract of the judgment of the Full Federal Court I set out here to make the point. Tomorrow I will publish a post about the comments made by their Honours as to the meaning of that term. Hopefully it will aid the practical application of the general protections under the Act

“Construction of the relevant provisions

The principles which govern the construction of statutes are well established.  In Commissioner of Taxation of the Commonwealth of Australia v Consolidated Media Holdings Ltd (2012) 250 CLR 503 at 519; [2012] HCA 55 at [39], the High Court said that:

“This court has stated on many occasions that the task of statutory construction must begin with a consideration of the [statutory] text.”  So must the task of statutory construction end.  The statutory text must be considered in its context.  That context includes legislative history and intrinsic materials.  Understanding context has utility if, and in so far as, it assists in fixing the meaning of the statutory text.  Legislative history and intrinsic materials cannot displace the meaning of the statutory text.  Nor is their examination an end in itself.

These principles were recently applied by a Full Court of this Court in dealing with some other elements of Part 3-4 of the FW Act. In Australian Building and Construction Commissioner v Powell (2017) 251 FCR 470; [2017] FCAFC 89 the Full Court (Allsop CJ, White and O’Callaghan JJ) emphasised the need to adopt a practical approach to the construction of provisions which are intended to operate on business premises including construction sites on a daily basis. Their Honours said (at 474-475 [15]):

15          … First, to the extent that a provision is a civil remedy or civil penalty provision a necessary clarity of meaning should be striven for, to the extent that is possible and conformable with the language employed and context legitimately available.  Secondly, notwithstanding the closely regulated environment of industrial and employment legislation, provisions as to entry on to work sites and the regulation thereof should be construed conformably with the language used by Parliament practically and with an eye to commonsense so that they can be implemented in a clear way on a day-to-day basis at work sites.  The legislation needs to work in a practical way at the work sites, and if at all possible not be productive of fine distinctions concerning the characterisation of entry on to a site.

So construed the subsection lent support for the view that s 494 (which provides that officials must not exercise State or Territory occupational health and safety rights unless they hold permits under the FW Act), as part of Part 3-4, is directed only to the kinds of rights of entry granted to or conferred on officials of organisations: see at 478 [40]. Their Honours, however, cautioned that it did not follow that Part 3-4 “is only about that subject or that the meaning of words should be read down to conform only with that subject”:  at 478 [41] (emphasis in the original).”