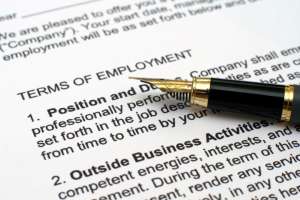 The issue of what constitutes a workplace right continues to hang arounds like a bad smell in current Australian workplace law. The concept of safety net contractual entitlements under sec 12 of the Fair Act is of profound importance to the general protections and is a matter which many lawyers who claim to be specialists in employment law are (at least as far as I have experienced in many general protections’ conciliations) are ignorant of.

Here is an example of the principles in action.

“However, contractual entitlements are not generally seen as workplace rights for the purposes of s.341(1)(a) of the Act.  An employment contract is not a workplace law, workplace instrument or order made by an industrial body.  The point was considered by Mansfield J in Barnett v Territory Insurance Office (2011) 196 FCR 116. His Honour said:

Thus, the contractual entitlement to redundancy payments is not, per se, a workplace right in the sense defined in s.341 of the Fair Work Act.

Safety net contractual entitlement means an entitlement under a contract between an employee and an employer that relates to any of the subject matters described in:

(a)  subsection 61(2) (which deals with the National Employment Standards); or

Clause 75 of Mr Martens’ contract represents an entitlement under his contract that relates to a subject matter described in s.61(2) of the Act – the National Employment Standards.  One of the subject matter areas listed in that subsection is notice of termination and redundancy pay: s.61(2)(i) of the Act.

However, the Fair Work Act gives an employee a remedy in respect of contraventions or non-observance of safety net contractual entitlements. The Act provides:

(2)  The entitlement has effect under this Act subject to any modifications, by a law of the Commonwealth (including this Act or a fair work instrument), a State or a Territory, of the safety net contractual entitlement.

Additionally, Mr Martens had the ability to initiate and participate in a process or proceedings under a workplace law – namely the process provided for by s.543 of the Act. On the facts for which Mr Martens contends, his position was to be made redundant and there being a case of genuine redundancy, his entitlements under cl.75 of his contract were engaged. If engaged, they took effect as an entitlement under the Fair Work Act enforceable by application pursuant to s.543 of the Act. To the extent that the respondents contend to the contrary, I reject those submissions.

However, Mr Martens’ case is not that any adverse action was taken against him because he had those rights or he intended to exercise them.  The respondent did concede that Mr Martens could rely on s.96 and 97 of the Act (the National Employment Standard personal or sick leave provisions) and s.119 of the Act (the National Employment Standard redundancy pay provisions) to maintain that he had relevant workplace rights for the purposes of s.341(1)(a) of the Act.

Mr Martens also argues that he had a workplace right that sprang from s.389 of the Fair Work Act. That section defines the circumstances in which a person’s dismissal will be seen as a genuine redundancy (s.389(1)) and when it will not( s.389(2)). That definition is relevant to that part of the Fair Work Act that deals with unfair dismissals. Specifically, it is relevant to when a person will be seen to have been unfairly dismissed for the purposes of s.385 of the Fair Work Act. It does not create a workplace right in the sense promoted by Mr Martens in this case.

Section 361 of the Act is important.  It creates a statutory presumption that casts upon an employer in appropriate circumstances the burden of proving that its actions did not constitute adverse action for a proscribed reason.  A person takes action for a particular reason if the reasons for the action include that reason (s.360 of the Act).  However, the reason must be a substantive or operative factor in order for there to be a contravention.

The onus cast upon an employer by s.361 of the Act is usually discharged by the decision-maker giving evidence (accepted by the Court) that the reasons for taking the adverse action did not include a prohibited reason.

However, before s.361 is engaged, an applicant must prove the existence of the objective facts which are said to provide the basis of the employer’s contravening conduct. Section 361 is not engaged unless and until an applicant establishes the elements of each of the general protections upon which he seeks to rely. It is not enough to merely make assertions, they must be determined objectively and have a foundation in evidence.

Against that legal framework, it is necessary to turn to the facts of the case.”