Representation in the Fair Work Commission 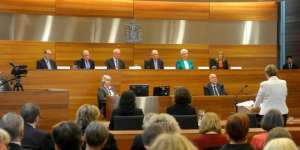 The Fair Work Commission is not permitted to allow a party to be represented by a lawyer or paid agent unless the conditions stipulated in sec 596 of the Fair Work Act 2009. For example the Commission will not permit professional representation in a general protections’ conciliation conference unless the conciliatior is satisfied that these conditions are met but curiously representation is automatically permitted in unfair dismissal conciliation conferences on the basis that it is an “administrative” function; quite why conciliation is apparently viewed in that light is a mystery to me and has never been satisfactorily explained.

The Commission will also routinely permit a person who is not a lawyer or paid agent to represent a party in an unfair dismissal arbitration, especially a wife or husband; see for example Batchem v Water Corporation (2016) FWC 9088.

Nevertheless both of those courts have the discretion in very limited circumstances  to allow limited representation by  non-lawyers based upon the inherent powers of superior courts; this is called representation by a “McKenzie friend” and ordinarily leave to do so will be in very tight terms;

“Whilst the general principle restricting the role of a McKenzie Friend is well established, there is authority to suggest that in appropriate circumstances a court may make an order permitting a person to make oral submissions in that role.  In Nepal v The Minister for Immigration & Border Protection[4] Edelman J referred to the decision of Santos v The State of Western Australia (No.2) and made the observation that he doubted whether there was such an absolute prohibition on assistance by a McKenzie Friend making oral submissions as stated in that case. Having considered a number of decisions relevant to whether such a prohibition existed, his Honour stressed the need for great caution in considering this question. He emphasised some of the considerations which have been identified by courts relating to the question of whether or not a McKenzie Friend should be permitted at all, namely the fact that the lay person is not regulated, they have not been trained in the ethical duties of lawyers, and there is an inherent risk that a non-lawyer representative may do more harm to a party than good.[5]  These considerations must still apply even where, as in this case, the McKenzie Friend is closely related to the applicant, is capable of addressing the Court in a respectful manner and it seems without question, has the best interests of the applicant at heart…………………………………

I reject the respondent’s submission that the power of this Court to permit representation is “exhaustively” defined by s.44 of the FCC Act.  Section 44 of the FCC Act states that a party to proceedings is not ‘entitled’ to be represented by another person unless the conditions in that section are satisfied.  It does not state that a person is prohibited from being represented by another person unless the stipulated conditions are satisfied.  The respondent’s submission ignores s.15 of the FCC Act which says:

“The Federal Circuit Court of Australia has power, in relation to matters in which it has jurisdiction, to:

(a)          make orders of such kinds, including interlocutory orders, as the Federal Circuit Court of Australia thinks appropriate; and

(b)          issue, or direct the issue of, writs of such kinds as the Federal Circuit Court of Australia thinks appropriate.”

“The Court has power, in relation to matters in which it has jurisdiction, to make orders of such kinds, including interlocutory orders, and to issue, or direct the issue of, writs of such kinds, as the Court thinks appropriate.”

Section 23 of the FC Act has been held to give that court power to permit lay advocates to appear in proceedings before it. Melaleuca of Australia & New Zealand Pty Ltd v Duck [2005] FCA 1481, referring to s.23, held that it conferred a power that was wide but not unlimited. The Court observed that it had an inherent power to control its own procedures. Having referred to both the FC Act and the Judiciary Act 1903 (Cth), the Court observed:

“… A barrister or solicitor has a statutory right of audience in the Court.  While it is apparent that the ordinary and preferred course is that a party appear in person or by a solicitor or barrister, neither the Act nor the Rules nor the Judiciary Act proscribe or preclude an appearance by a person on behalf of another person, with the leave of the Court.  A court has an inherent right in regulating its own proceedings to allow a person, not being a party or a party’s lawyer, to conduct a case on behalf of a party where it is desirable to do so in the interests of the administration of justice (Halsbury’s Laws of Australia).  However, such an application would not be granted as a matter of course.”[14]