A trend has emerged in the past year or so for employers to make a contract with an employee by way of a comic illustration rather than a written contract with terms and conditions. 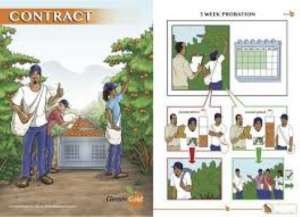 Will this catch on in Australia do you think?

This is an example which was adopted successfully in South Africa in 2016 for an employer to explain the concept of a 3 week probation term to illiterate fruit pickers for whom a written contract would not have been useful. The comic contract was in fact produced by a law firm for the farming enterprise.