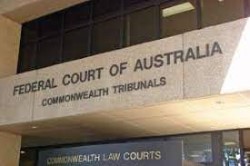 This is a decision of the Federal Court of Australia granting a slight extension of time in which to file a general protections application with the Court.

“1    This is an application under the Fair Work Act 2009 (Cth) (the FW Act) in which the applicant alleges that he was dismissed in contravention of a general protection provision by Barminco Limited. The application was preceded by an application to the Fair Work Commission (the FWC) for the FWC to deal with the dispute. That application was made under s 365 of the FW Act and involved an allegation made by the applicant that he had been dismissed by the respondent in contravention of Pt 3-1 of the FW Act. The FWC conducted a conference to deal with the dispute on 2 November 2021. By certificate dated 5 November 2021, and given pursuant to s 368(3)(a) of the FW Act, the FWC certified that it was satisfied that all reasonable attempts to resolve the dispute (other than by arbitration) had been unsuccessful.

(3)    If a document is faxed or sent by electronic communication to a Registry, the document is, if accepted by a Registry under subrule (1), taken to have been filed:

(a)    if the whole document is received by 4.30 pm on a business day for the Registry—on that day; or

(b)    in any other case—on the next business day for the Registry.

Note 1:    Business day is defined in the Dictionary.

Note 2:    File is defined in the Dictionary as meaning file and serve.

Note 3:    Because of the Court’s computer security firewall, there may be a delay between the time a document is sent by electronic communication and the time the document is received by the Court.

4    On the face of the documents, the applicant’s Originating application was not made within the 14-day period referred to in s 370 of the FW Act. The Court has a power under s 370 to extend the time for the making of the application.

5    The respondent applied by Interlocutory application dated 17 December 2021 for orders that the Originating application be dismissed on the basis that it was not made within the 14-day period prescribed by s 370 of the FW Act and no application for an extension of time had been made. In the alternative, the respondent seeks an order that the applicant be required to file a Statement of Claim within 28 days. The Originating application is accompanied by a 16-page document containing 47 paragraphs which is titled “Details of claim under the Fair Work Act”. The respondent’s point with respect to this document is that it is not a Statement of Claim or an alternative accompanying document under the Employment and Industrial Relations Practice Note (E&IR-1) (at para 4.2). The respondent’s Interlocutory application is supported by an affidavit of Renae Jade Harg affirmed on 16 December 2021.

6    The respondent’s Interlocutory application seems to have prompted the applicant to make an application for an extension of time. That application was filed on 13 January 2022 and is accompanied by an affidavit of the applicant’s solicitor, Robert Grealy, filed at the same time.

7    I made an order extending time and other orders and said that I would deliver reasons for doing so. These are the reasons.

8    On the face of the documents, the Originating application was lodged with the Court 28 minutes after the time prescribed by the Rules and is one day out of time.

10    I do not accept that the application was filed within time. Mr Grealy did not produce the accounting records to which he referred and there is no sufficient reason to doubt the accuracy of the Notice of filing and hearing. I am not confident Mr Grealy is able to provide a clear explanation as to when the document was filed for the foregoing reason and because at an earlier hearing, he seemed to suggest that the delay was due to difficulties with lodging documents through the online portal.

13    The respondent concedes that it is unlikely to suffer prejudice “other than the usual prejudice of having to defend an out of time and meritless application”. It submits that the absence of prejudice is not a sufficient basis upon which to grant an extension of time.

16    In my opinion, where the application is, in effect, 28 minutes “out of time”, the error is a solicitor’s error and there is no prejudice to the respondent if an extension of time is granted, the Court does not delve into the merits to any great extent. I have read the details of the claim under the FW Act and it seems to me that the merits may depend on the resolution of a number of factual issues, or issues of mixed fact and law. In those circumstances, I am not satisfied that the claim is obviously lacking in merit or untenable. Beyond that assessment, the merits do not bear upon whether an extension of time should be granted.

17    It seems to me that although the explanation for the delay is unsatisfactory, the insignificance of the delay and the prejudice to the applicant if time were not extended warranted an extension of time.

18    The other matter raised by the respondent in its application was cured at the hearing by the making of the following order: