Equity and the Fair Work Commission 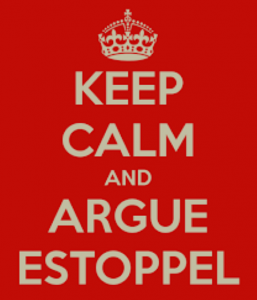 In an interesting but patently correct decision the Fair Work Commission has determined that it cannot and should not incorporate equity doctrines such as equitable estoppel to its proceedings. In an unfair dismissal case, an employee had argued that the employer was estopped from arguing that his employment was not covered by a modern award because it had previously suggested that it was. The Commission flatly rejected the argument and permitted the employer to make that argument , and ultimately accepted that, on the evidence, the applicant employee’s employment was not covered by a modern award.

“Mr Caruana says that it was not until the directions hearing and conciliation proceedings before Commissioner Platt on 26 and 29 March 2018 and a subsequent email to the Commission on 29 March 2018 by Toop’s lawyers that he was made aware that Toop were contesting that he was covered by the Real Estate Award 2010 at the date of dismissal.

He submits that as a matter of fairness, if not a matter of law, the employer should be barred from now contesting that proposition.

In response, Toop say that there is no doctrine of estoppel applying to Commission proceedings and that the employer, now faced with these proceedings, is exercising its right to have that proposition determined. It says that whether an employee was covered by a modern award is a mixed question of fact and law which falls to be determined irrespective of what either the employee or the employer said or believed to be the case. On the issue of the employer’s representations, it points to Suzannah Toop’s evidence 22 that, at the time of completing the Employer Response (F3), she was unsure of the correct answer, initially intended to select ‘no’ but then ticked the affirmative box as the Award had (in the employer’s view) applied to Mr Caruana’s employment when he was first employed.

Establishing award coverage is a legal issue based on jurisdictional facts. It is a jurisdictional prerequisite to be protected from unfair dismissal for an employee (such as Mr Caruana) who was neither earning below the high income threshold nor covered by an enterprise agreement. It would be error on the part of the Commission if it did not make a finding in that regard. Jurisdictional facts need to be established and applied to the instrument using relevant legal principles.

Terms and conditions of an award are statutory in character and cannot be converted into private contractual rights. 23 What an employer says or believes during the course of employment on the question of award coverage is no more relevant than what an employee says or believes. Neither can unilaterally or even jointly contract into award coverage any more than they can privately contract out of award coverage (unless the instrument or governing statute itself permits). Consistent with well-established principles of statutory interpretation24, absent any ambiguity in the terms of a modern award, extraneous material such as the belief or intention of its author (the Commission) is not a relevant consideration. Even where ambiguity exists and resort may be had to the intention of those who framed the instrument, the subjective opinion of an employer (or an employee) at a given point in time cannot be evidence of the Commission’s intent.

Even if this were not the case, there is no legal doctrine of estoppel (or such other) that generally applies to the work of the Commission. The Commission is not a court of law. 25 Nor is it a tribunal of strict pleadings.26 In performing functions and exercising powers under the FW Act the Commission must perform those functions and exercise those powers in a manner that, relevantly is fair and just; is quick, informal and avoids unnecessary technicalities; and is open and transparent.27

In administering its unfair dismissal jurisdiction, the Commission’s procedures are intended by the legislature to be “quick, flexible and informal” 28. The FW Act provides that the Commission may inform itself in relation to any matter before it in such a manner as it considers appropriate.29

Absent any evidence of mala fides or abuse of process, it would be a denial of procedural fairness to prevent a party with standing the right to raise relevant legal or jurisdictional matters in proceedings before the Commission. It would also be inconsistent with the statutory directive concerning flexible and informal procedures to strictly bind a party to the terms of their originating proceedings or responses, without good reason.

The evidence before me discloses no mala fides or abuse of process. Suzannah Toop’s evidence that she was uncertain how to respond to question 1.1 of the F3 is uncontroverted. Once Toop obtained legal advice on the application it recanted that position. Whilst this understandably frustrated Mr Caruana, it should not be a surprise to an applicant that a respondent to proceedings of this type will take steps to secure legal advice on claims made against them. Toop did not delay communicating that revised position to the Commission or Mr Caruana once it had been determined. Though it added a burden to Mr Caruana’s preparation of his case, it did not prejudice that preparation.

I conclude that there is no basis on which Toop is estopped or otherwise barred from arguing against Mr Caruana’s claim of award coverage.”