Employment law and the Federal Circuit Court of Australia 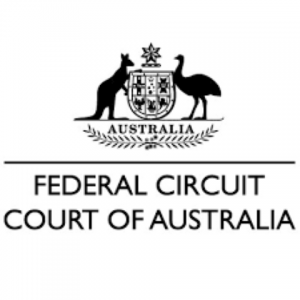 This a decision of the Federal Circuit Court which explains the nature of its small claims jurisdiction arising out of the Fair Work Act, and the circumstances in which (a) legal representation will be permitted (not generally welcome) and (b) the nature of its interlocutory powers to strike out claims or not. Please forgive the odd formatting, which arises from the court’s publications.

This a decision of the Federal Circuit Court which explains the nature of its small claims jurisdiction arising out of the Fair Work Act, and the circumstances in which (a) legal representation will be permitted (not generally welcome) and (b) the nature of its interlocutory powers to strike out claims or not.

(a)          the objects and purposes of the Small Claims Division and also of this Court to provide quick, informal and just resolutions of disputes without undue technicality;

(b)          the complexity of the matters that arise on the face of the application, be it factual or legal, and whether a lawyer by reason of their training and expertise, might be of assistance to the Court;

(d)          the familiarity, and competence, of the proposed legal representatives to provide assistance to the Court on the complexities or technicalities that arise; and

(e)          whether the party seeking leave to be represented has an in-house lawyer or employee capable of conducting the matter satisfactorily. (case references excluded)[7]

iii)         the manner in which the hearing is conducted by the court well versed in assisting self-represented parties who appear before it;[10] and

Application in a case

(1)          The Federal Circuit Court of Australia may give judgement for one party against another in relation to the whole or any part of a proceeding if:

(b)          the Court is satisfied that the other party has no reasonable prospect of successfully defending the proceeding or that part of the proceeding.

A proceeding need not be ‘hopeless’ or ‘bound to fail’ for it to have no reasonable prospect of success.[14]  …

The exercise of powers to summarily terminate proceedings must always be attended with caution.  That is so whether such disposition is sought on the basis that the pleadings fail to disclose a reasonable cause of action or on the basis that the action is frivolous or vexatious or an abuse of process.[15]  …

Section 31A(2) requires a practical judgement by the Federal Court as to whether the applicant has more than a ‘fanciful’ prospect of success. That may be a judgment of law or of fact, or of mixed law and fact. Where there are factual issues capable of being disputed and in dispute, summary dismissal should not be awarded to the respondent simply because the Court has formed the view that the applicant is unlikely to succeed on the factual issue. Where the success of a proceeding depends upon propositions of law apparently precluded by existing authority, that may not always be the end of the matter. Existing authority may be overruled, qualified or further explained. Summary processes must not be used to stultify the development of the law.   …

departs radically from the basis upon which earlier forms of provision permitting the entry of summary judgment have been understood and administered.  Those earlier provisions were understood as requiring formation of a certain and concluded determination that a proceeding would necessarily fail.[17]

Rather, full weight must be given to the expression as a whole. The Federal Court may exercise power under s 31A if, and only if, satisfied that there is ‘no reasonable prospect’ of success. Of course, it may readily be accepted that the power to dismiss an action summarily is not to be exercised lightly. … At this point in the development of the understanding of the expression and its application, it is sufficient, but important, to emphasise that the evident legislative purpose revealed by the text of the provision will be defeated if its application is read as confined to cases of a kind which fell within earlier, different, procedural regimes.[19]

as is vested in it by laws made by the Parliament:

(b)          by the application of section 15 C of the Acts Interpretation Act 1901 to a provision that, whether expressly or by implication, authorises a civil proceeding to be instituted in the Federal Circuit Court of Australia in relation to a matter.[20]

What is the applicant’s claim?

At any stage of the small claims proceedings, the court may amend the papers commencing the proceedings if sufficient notice is given to any party adversely affected by the amendment.

No Letter of Offer provided stating that office location was based in Canberra.  Claiming expenses incurred between Sep (sic) 2017 through to July 2018.[23]

I was offered a position of an ITSM SME Business Consultant however I was not provided an internal letter of offer stating that my office location had moved interstate based in Canberra.  I raised this concern on numerous occasions but to no avail.  It is company policy & protocol that a letter of offer is produced that details locality and terms of the position.  I did not receive a letter of offer for the said position and as such I am claiming for expenses incurred by me for Sept 2017 – July 2018.[25]

I was offered a position as a ITSM SME Business Consultant with Fujitsu Australia working on the Department of Defence account from August 19th 2016 through to the end of July 2017.

I am claiming reimbursement expenses incurred by me during that timeline for travel incidentals, which included, accommodation, per diem, and motor vehicle kilometre reimbursement as I was commuting from Melbourne to Canberra.[26]

… whilst unstated, Mr Kotaidis appears to allege that he incurred expenses under the mistaken impression that Fujitsu would reimburse him. However, even taking Mr Kotaidis’ allegations at their highest, such a case – whilst conceivably capable of establishing an equitable cause of action, for example – could not establish a relevant FW Act contravention actionable in this Court. Nor could such a claim otherwise engage this Court’s jurisdiction. It could only do so if there were some other aspect of the justiciable controversy which attracted federal jurisdiction. On the face of Mr Kotiadis’ claim, there is none. It follows that insofar as Mr Kotaidis has any claim against Fujitsu – a proposition which Fujitsu of course denies – that claim lies elsewhere.[34]

(ii)    because of a safety net contractual entitlement; or

… an entitlement under a contract between an employee and an employer that relates to any of the subject matters described in:

allowances, including for any of the following:

Allowances, in my submission, in the context of awards, whether modern awards or historically, are defined amounts paid in addition to wages which deal with some particular incident of employment, for example, the payment of a tool allowance to employees covered by a building award to set out either a particular dollar amount per week or a particular percentage of a weekly wage in order to compensate for a particular incident of employment, whether it’s expenses incurred or a particular disability associated with the performance of that work.  What appears to be alleged here, of course, is some sort of entitlement at large to reimbursement of expenses without any articulation of how the contract is said to provide for that entitlement, whatever the limits of that entitlement are said to be.[36]