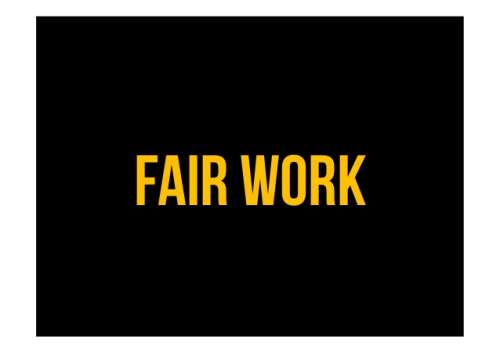 The Fair Work Commission will not ordinarily award compensation for unfair dismissal unless the employee has taken reasonable measures to  mitigate his or her financial loss, in this case by seeking alternative employment.

“I reject Mr Swire’s contention that the company’s failure to reemploy him after he had submitted his vaccination certificate on 16 December 2021 supports his contention that his dismissal was unfair. Strictly speaking, I consider the events that occurred after the dismissal to be irrelevant to whether the dismissal was unfair. A claim under s 394 of the Act concerns an alleged unfair dismissal, not an alleged unfair refusal to reemploy. But even taking these subsequent matters into account, I see nothing harsh, unjust or unreasonable in the company’s actions. I note that Mr Swire obtained his first dose of vaccine before his dismissal took effect (he received the vaccination in the morning and read his termination letter in the evening). But he did not tell the company about his vaccination until after the dismissal, and well after the 9 December 2021 deadline by which he had been directed to confirm his intentions.

[42] I do not accept Mr Swire’s contention that his dismissal was unfair because he was simply confused about the company’s requirements of him and thought that he was not required to be fully vaccinated until he returned to work on 10 January 2022. In my view, Mr Swire knew what the company required, and was evasive because he had not made up his mind about whether to get vaccinated. He decided too late to get vaccinated, after having ignored the company one too many times. But if in fact Mr Swire was confused, it was because he had not paid due attention to the company’s requirements. The letter of 11 October 2021 was clear. So was the letter of 26 November 2021. Mr Dean’s direction to Mr Swire on 8 December 2021 was also clear, and very simple – Mr Swire had to tell him by close of business the following day whether he would get vaccinated and if so when.

[43] I reject Mr Swire’s contention that because his position was later filled by another company employee, there was nothing compelling the company to make a decision about his future. The company does not need to justify its desire to plan for the future. It wanted to know whether Mr Swire would be able to do his job. That meant that it needed to know whether he would be vaccinated. It was not unfair of the company not to give Mr Swire an even longer period to meet its requirements. The dismissal was not ‘premature’, as Mr Swire contended. Nor was it unfair of the company to decline to rehire Mr Swire after he produced his vaccination certificate. By that stage, Mr Swire had failed to follow the company’s directions.

[44] Finally, even if I had concluded that Mr Swire’s dismissal was unfair, I would not have awarded a remedy. I would have found reinstatement to be inappropriate, because Mr Swire does not seek it. And I would have declined to award compensation, because I am not persuaded that Mr Swire took appropriate steps to mitigate his loss. Mr Swire said that since his dismissal he had applied for about five jobs, but not until mid-February and early March 2022. His mitigation efforts were confined to a mere few weeks. Mr Swire’s evidence in re-examination that employers were ‘not hiring’ in December and January was unexplained and unconvincing. An order for compensation would have been inappropriate, and I would not have made one.

[45] Having regard to s 387 of the Act, I consider that Mr Swire’s dismissal was not harsh, nor was it unjust or unreasonable. It was not unfair. The application is dismissed.”